About 7 days ago I attended a special training by a USANA Diamond here in Manila. He is Mentor Mel, fondly referred to as Mentor of All Mentors. Mel got this title because he gave his time, energy and knowledge to everyone and anyone eager to learn. He well deserves this great reference as mentor.

Whie everyone was getting started in USANA in Philippines in 2009 he saw people badly needed mentoring. He was not so good back then but took up the challenge to learn and then share what he learned. Gradually everyone started to listen to him and he got a huge following which today is in the 1000’s. This is a story from humble beginnings to greatness. Mel had found his purpose which helped him to greatness as the years went on. 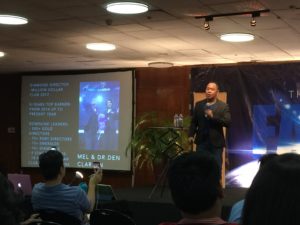 Learn how to start a home based business in manila Philippines and never quit.

Now he opened up to us his journey last Monday in MLM, more so in USANA. Back in 2009 when he first got started he struggled to get his business off the ground for the entire first 12 months. Rarely earning a check for weeks or months at a time.

Most people would find this a good enough reason to quit and find something else to do. Why?

Many of his team were earning. Some were earning over 200K a month. Not him.What was hard for him was he was one of the very first few that started in USANA Philippines in January 2009. Its sure was very disheartening.

HE THOUGHT ABOUT QUITTING!

There was a time after the first big Usana event in Makati Sport Stadium in 2009 in September/October he said he was so tempted to throw in the towel and quit. How many of us would have done that or thought of doing that. However, he says thank God he did not let his reasoning get the better of him. He stayed on. Today he has been able to provide more for his family because of that one decision not to quit.

We can do what ever we want however we cannot escape the consequences of our actions. So chose what we do wisely is his advise.

Because a few short months after he wanted to quit his business started to grow or show signs of growing. From that point onwards he grew not so fast at first but grow he did. Though some of his downline team grew quickly but grow he did. Today he is more respected for his contribution to others than his title.

Fast forward to 2018 he now is a Diamond and earns a Very attractive monthly income. He has so many successful people in his organization today and all of them love and respect him so much.

He says what if he did quit back then he would never have enjoyed the life he is living today.

I am sharing this unique story which is like many stories of people who BELIEVED in what they were doing and kept DOING what they envisioned their lives to be. Today they HAVE what many people dont have. It all starts because of BELIEF.

Most people quit too early. They seldom have visions strong or clear enough to help them preserve  and stay the course.

YOUR TAKE HOME LESSON IS …

If you are doing something do it as if you already have the title and income and just do the job well. Don’t wait for the title and then do the job. It never happens that way.