You are here: Home / A Snippet Of My Life’s Journey
Let me share my story with you…

For those of you who don’t know me well this is my story. My story starts with my growing years in the 1960’s then through the ’70’s

I grew up in a middle class family, among 7 brothers and sisters and I being the eldest had a a silent responsibility thrust upon me that if anything did happen to my Dad I would be the one to take care of the family. It an like an unwritten law among Asian families.

The Poor Dad Example I Was Exposed To …

As a boy I saw how hard my father and mother worked at their jobs. Dad was an factory middle management manager while my mother was a school teacher. They both worked hard, did without much just to help us kids to get through school. I saw how my parents used to budget their income each month. Without fail each month their income would run out before the 25th of the month. And then we lived off credit. Not from credit cards as they were non back then in the 60’s and 70’s but on the local store keepers credit system, giving us credit to buy the necessary groceries  just enough to live off. This was not to buy expensive gadgets etc. Just for flour, eggs, vegetables to live on. That was our life back then growing up.

The Example Of The Rich Dads Around Me!

However, not everyone I knew lived like this. The business class had a different story to share.I saw at that time friends at school whose parents had small local businesses had more money than my educated Dad & Mum. Somehow I heard the educated parents of mine talk not so highly of the business class back then. If you were not educated, people would looked down at you as being educated. Having a degree was a big thing back then.
Remember this was way back in the 60’s and early 70’s. However I feel life hasn’t changed much now in countries like India or Philippines. Parents still want their children to have proper education rather than become financial literate. 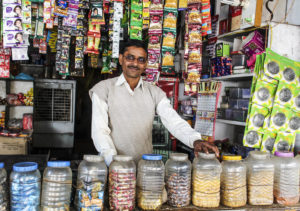 Now the business people never went to school so they were sort of looked down on. They sat all day long in shops selling their wares to the shoppers. These shoppers who worked jobs and worked in the local factories around. The locals were living pay check to pay check. However these business people were the ones who control the money. They had excess money. Funny isn’t it.

Whats Wrong With The School System?

The school system were pushing all of us to follow our parents in 1970’s and is still doing so. Not teaching us to make money but rather work for it. There is a difference between earning money and making money.

Making money work for you Vs working for money.

When we earn money we exchange our services or knowledge in return of wages. Making money is when we sell goods or services and make income from the goods sold.

A salary was considered secure income and income from commissions was risky. Today I have learned that commissions are far better than fixed incomes. In fact there is nothing such as security these days in a job.

The Example Set By My Parents …

In 1970’s mum and dad were not asking us to learn from these business people who were financially successful but they were forcing us to go to school, finish college and get a job. By following my parents advice I would be living a life just like theirs if I was an obedient son.

Well right after college I did get two jobs as my parents wished me to. However just 3 years later I ventured out on my own and became an entrepreneur or self employed person running a restaurant in Brisbane. That was my dream, to have a business to work for me.

Now the fun starts. What I had Not Gambled For …

What I did not see behind the scenes of those hard working friend’s parents lives were the sacrifices they made to make their money everyday.

Unlike my dad and mum these people seldom had holidays and worked when they were sick. I had no idea about all this until I started my own restaurant in Brisbane. I started to give up quality time with my family, my young family back then just to keep my busy restaurant successful. Life wasn’t fun at all in-spite of having all that money. There was no balance. Surely there had to be a better way. Why were super rich people so relaxed? What was they secret?

The Secret Was In …

It was after I read the book called RICH DAD POOR DAD did I realized why things were the way they were.

So when I started to read and educate myself on why things happen differently in the financial world I saw business trends and started to take note of what I learned.

Why The Alternative Franchise Models Works!

Today I am no longer with restaurants nor run small business or am self employed. Rather I ran an online-offline big business that has over 500 people working currently within it. We are all affiliated with a Billion dollar company that we have partnered with. The Alternative Franchise!

The irony is that these people who are in my team work for themselves and I don’t have the headaches like traditional businesses do. I don’t need to pay them wages, have office space, etc.

I still get paid on their output and have more time freedom and financially better off.

Today I have the ability to work where I want and with whom I wish. I call this freedom.

If you have reached so far in my story and feel you are trapped and want a better life then its time we connect. You can learn from my story and make your own life, a life to remember.

Why not connect with me and lets have a chat about how you too can turn your life around with some help. Its possible. Why wait until you are at the end of life to have regrets. Lets work together and make things happen.

Look forward to connecting with you.
I hope you liked my story.